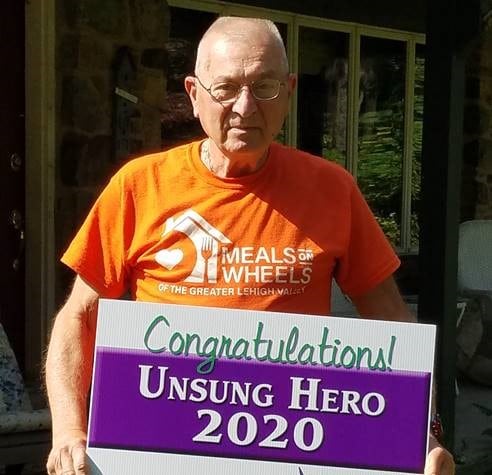 The Unsung Heroes Awards, sponsored by the Lehigh County Office of Aging and Adult Services, celebrate the contributions of older adults in our community who generously give their time and talents to enhance the lives of those around them while demonstrating healthy aging. This was the twentieth anniversary of these awards in Lehigh County and focused on the unsung heroes our communities cannot live without and who are always there to volunteer their time when needed.

Frank Schlosser was our recipient of this award this year, recognized for his tremendous dedication, great leadership and one-of-a-kind sense of humor.

Frank began his adventures at Meals on Wheels in 2005, joining his wife Barbara delivering meals.  Every Thursday for ten years they delivered on the same route, bringing meals and much-needed friendship to clients in the Emmaus and Coopersburg areas.  Motivated by a belief in taking care of others, they continued these deliveries, substituting additional days, even as Barbara underwent treatments for cancer.

When Barbara passed away in 2016, Frank could have decided to stop volunteering.  Instead, in his words, he found that “a difficult time was made easier the more I volunteered and helped others.” He added a second weekly delivery route and became the first recipient of our Lehigh County “Lone Ranger” award, given to volunteers for going above and beyond while doing their routes solo.  He also took on additional duties, picking up items from our office, arriving early at the pickup site to put out coolers, weekend packs, pet food and other “extras” and assisting with distribution of frozen soups and holiday meals.  All this helping adds up: Frank has contributed over 1,400 hours to Meals on Wheels.

No matter the situation, Frank always uses his sense of humor to keep things positive.  As his delivery partner Shirley Rennolds noted, “Frank can get people to do things because they’re having fun at the same time.”  Frank says he enjoys making even the crabbiest person laugh, an approach that has endeared him to his clients.  He has shared smiles and laughs along with the meals he has delivered over the past fifteen years, whether proposing to a 95-year-old on his route or serenading someone with a “Frank original.”  What is no laughing matter is the number of delivery stops Frank has made – 6,820 and counting – and the number of meals he has handed out – over 13,600. This underscores Frank’s belief in “older people taking care of even older people…someday we’ll be one of them!”

At 82, Frank says his clients have become family, and his own family plays an important role in his life. With five children, eleven grandchildren and a great-granddaughter, we are grateful that Frank has the time and the energy to include Meals on Wheels as part of his extended family (along with his rescue cat Dolly and five chickens)!  He is an indispensable part of our program, sharing love and laughter with people who are often isolated and alone.  There is only one Frank, and we are honored to nominate him for this award; we can think of no one more deserving.