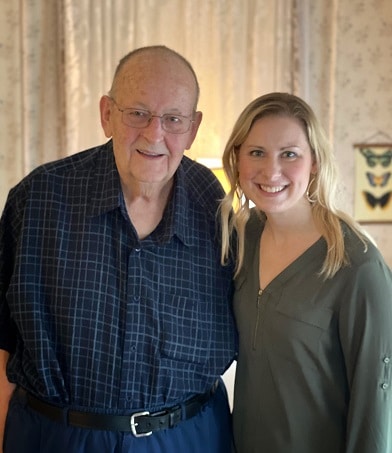 It is our goal that clients not only receive meals, but that they receive healthy, medically-tailored meals that help them maintain their health. For one client, Mr. Lance, this rang all too true.  He was excited to be able to share his success story with you!

In May 2017, Mr. Lance was 85-years-old and suffering from an infection causing him to have painful blisters on his legs. These leg blisters were causing his mobility to suffer so much so that he was not even able to get out of chair on his own. Mr. Lance was hospitalized, treated for the blisters, and later sent to rehabilitation for mobility. Unfortunately, a few weeks later, one of Mr. Lance’s visiting nurses noticed poor coloring in his face as well as other suspicious symptoms. This eventually led Mr. Lance back into the hospital where it was discovered that he was not expelling carbon dioxide properly while he was sleeping, causing toxic levels to build in his body. At this time, he was also diagnosed with congestive heart failure and an irregular heartbeat. Once Mr. Lance was properly diagnosed and stable on his treatments, he returned to a rehabilitation facility for continued strength and mobility training.

After four months of being in the hospital and rehab, Mr. Lance was finally able to return to his home. Upon his return, his daughter Michele made the call to Meals on Wheels.  In a relatively short amount of time, Mr. Lance was back to a healthy weight and had reduced the amount of medications he needs to take. He reports that he couldn’t have done it without the low sodium and low sugar meals he received from Meals on Wheels.  “All the meals are excellent and very tasty”, he adds.

Today, Mr. Lance is happy and continuing his maintenance of good health. He exercises his body daily with his pedal machine, and his mind by creating beautiful color-by-number pictures on his electronic tablet. He loves being able to go out on dates with his daughter and niece and looks forward to when his grand kids visit him. Mr. Lance reports that he is trying to write a book, “right now I have 87 chapters written, but I would like to write 100”. His advice on how to obtain his goal is, “you have to do the work to get where you want to go”.