Meals On Wheels Was There 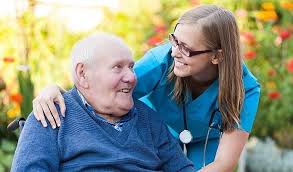 On a sunny, warm August day, Meals on Wheels volunteer, Kasey was delivering on her usual route in Allentown. The deliveries were going smoothly as Kasey approached her next stop, the home of 92 year old, Hector. Following the delivery instructions, she knocked on Hector’s front door and waited for him to answer. Kasey has been delivering meals to Hector for over a year and when he did not answer the front door she tried knocking on the back door of the home where he sometimes sits. However, when Hector still did not answer Kasey knew she needed to call MOW to report his absence.

While walking back to her car for her phone, Kasey noticed Hector’s car sitting in the parking lot. She could see that there were groceries in the back and that  the driver’s door was open. As she got closer, she could see that Hector’s legs were sticking out of the car and he was laying across the front seats with foam in his mouth. Kasey, who had had previous crisis training for her job, called to Hector asking if he was okay and tapped him to see if he would respond. With no response, Kasey immediately called 911 followed by MOW to report the emergency. Kasey stayed by Hector’s side until the emergency squad arrived and rushed him to the hospital.

The next day, MOW staff received a call from Hector’s granddaughter, Monique, to express her gratitude and gratefulness to the volunteer who saved Hector’s life. Monique stated that unbeknownst to them, Hector was experiencing Atrial fibrillation and needed emergency surgery to have a pacemaker placed. The doctor’s informed her that if Kasey had not found Hector when she did, he would not have survived that day.

To many of our clients, Meals on Wheels is much more than just a meal. You never what the day will bring. On that day in August, it brought Kasey, Hector’s hero.